Paying for coffee with stocks? The new meaning of money in the blockchain economy

I love money. I love everything about it. I bought some pretty good stuff. Got me a $300 pair of socks. Got a fur sink. An electric dog polisher. A gasoline powered turtleneck sweater. And, of course, I bought some dumb stuff, too. –Steve Martin

Somewhere around 1800 B.C., on the fertile shores of the river Nile, a domineering civilization faces problems unlike any before. With the rise of wealth in the ancient Egypt, a problem of theft becomes a major hurdle to progress. They use gold as money - leveraging the much sought-after traits of acceptability, malleability, divisibility, homogeneity, durability and - useful, but tricky - portability.

The problem is that gold is equally portable for the thief as it is for the owner. With people keeping gold in their houses and spending most time away from it - keeping it safe from theft is impossible. This poses an existential threat to gold as money. If it can’t be saved and accumulated - it’s not good for much. Luckily for the Egyptians, a revolutionary new system is about to save gold.

The solution comes in the form of first specialized financial institutions. Temples would be used for people to store their money. They would be kept under constant guard and stealing from them would be not only a crime, but a direct insult to the gods. Banking is born.

Counterfeiters will be decapitated

The first real appearance of paper money was in China under the Tang dynasty. Kown as flying cash (because, unlike precious metals, paper money could fly on wind), it was issued by the government as a one to one representation of physical coins. This made it cheap and easy to transport large amounts of value from one city to the other. Even though it wasn’t meant as a legal tender - merchants quickly began using paper money instead of coins.

As for the matter of counterfeits - the Chinese had a very simple system in place. Printed on the denominations of the Ming dynasty coins it said:

The Board of Revenue, having petitioned and received the imperial sanction, prints the Great Ming Precious Note, to be current and to be used as standard copper cash. The counterfeiter shall be decapitated. The informant shall be rewarded with 250 taels of silver, and in addition, shall be given the entire property of the criminal.

The only people allowed to issue the coins were the government - the only ones that could be trusted.

A little under four thousand years after the Egyptians decided to stockpile their wealth in stone temples, I found myself at a blockchain conference on the Adriatic coast. It was a foggy day, in a place where its almost never foggy. An appropriate setting for a blur of cliché buzzwords which dominate blockchain conferences these days.

But amongst all of the repetition, one sentence, given sporadically in a talk by the Lykke cofounder Anton Golub, caught my attention and hasn’t left me ever since:

Just like the Egyptians of old - we have a need to safeguard our wealth. We have banks keep our money safe and exchanges keep our stocks safe. Since we use money, not stocks, for everyday payments - our money is liquid and universally accepted for goods and services. Our stocks - aren’t.

When our stocks and our money start living on the blockchain - trading everything with everything becomes frictionless.

To be clear, I don’t actually think people will be buying coffee with stocks. But saying that you’ll be able to is very impressive in its own right. That trading something as abstract as a share in a high-tech business for something as concrete and simple as a cup of coffee can be done in seconds without any middlemen? That’s the real promise of the blockchain.

Selling your house will be just a matter of transferring the token representing ownership of your house to the person who is buying it. And they could pay you with anything: money, stocks, another house. Its a world of fully automated value transfers.

Imagine one day sitting at a coffee shop with a person buying your car. You arrange a price, pull out your phones and with the tap of a button - you’ve given them money and now they own the car. No need to sign a contract, no need to go to the DMV to claim ownership.

Safeguards of our money, an institution since ancient Egypt, and a business since ancient Greece - are no longer needed. That’s the revolution of the blockchain.

Tradeable tokens representing hotel stays. Do you need to cancel your trip early? No problem - sell the remaining time to someone who needs it. Tokens representing subscriptions to services, tokens representing partial ownership of properties, bounty tokens, debt tokens (want to buy debt? you’re one click away), energy production tokens, reward tokens , and countless other implementations.

When all value lives on the blockchain - you can do really crazy things. Like buying coffee with Google stocks… 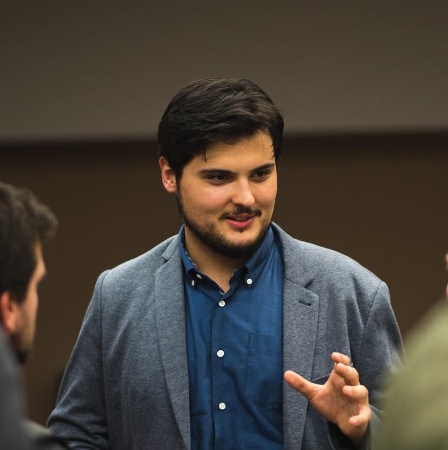 I'm an entrepreneur and a software developer. CEO of a blockchain startup aiming to simplify buying and selling of electricity. Actively participating in the proliferation of healthy (technology oriented) blockchain culture. Organizer of Blockchain Development Meetup Zagreb, lectured at HUB385 Academy and University of Osijek on topics of smart comtract development. In my free time, I'm a singer and a guitar/piano player. Contact at mislav@ampnet.io